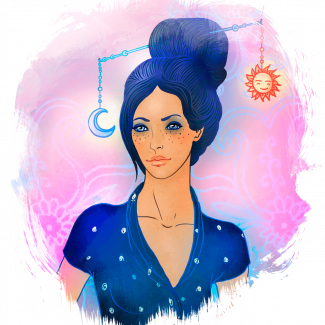 Your Libra 2018 Money Horoscope reminds you that in any given year there will be parts of the year where there is planetary activity on the income front and other parts of the year when there is planetary activity on the financial front. This is the normal pattern of a normal year, with the focus usually on income matters in October and November and the focus on money matters as a whole, in April and May.

That is because that is when the Sun moves through your income and financial sectors and where the Sun goes, Venus and Mercury follow. However, every now and then we have a year where, while the normal patterns still apply, there is something bigger going on and 2018 is one of those years.

To start with this is all about income matters, with lucky Jupiter in your income sector until the 9th November. This makes 2018 one of your most potentially lucrative income years in over a decade and with a lot of support from Neptune on the work front, this has the potential to be very lucrative.

Things get off to an empowered start, with Mars also in your income sector until the 27th January. The Sun, Mercury and Venus all moved through late last year, supporting Jupiter in his early months. However, Mars is the planet that can really smash through glass ceilings and give us the confidence to fight for what we deserve.

With Mercury returning on the 10th October and the Sun on the 24th October, there will be plenty of support during Jupiter’s final months. Even after the fact things will continue, with Venus returning for a double dip visit from the 3rd December to the 8th January.

This will squeeze out any remaining income potential, from this extraordinary year. While it won’t be immediately apparent, there are also some exciting developments on the financial front this year. To start with it is business as usual, with no focus on your financial situation and money matters as a whole until Venus returns to your financial sector on the 31st March.

With Venus here until the 25th April, the Sun from the 20th April to the 21st May and Mercury from the 14th May to the 30th May, this is when your annual financial update will take place. This is still business as usual, until Uranus returns on the 16th May.

This is the first time Uranus or any of the outer planets have visited your financial sector since 1942 and apart from a short break from the 7th November to the 6th March 2019, he’s here until 2027. This is the start of a major new period of financial growth and a journey towards a more authentic approach to money matters.